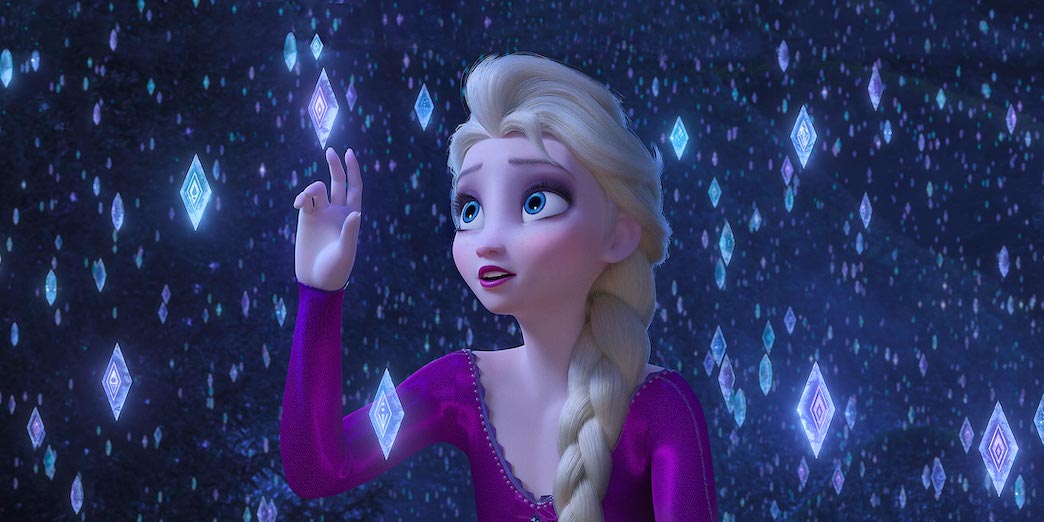 When the first Frozen film came out in 2013, none of us were prepared for the immense impact it would have on the culture. “Let It Go” became an overnight karaoke favorite/song no one wanted to hear ever again. Frozen merchandise was being cranked out at such a high rate and made its way so fast into the Disney theme parks, as the company tried to capitalize on what is still Walt Disney Animation Studios’ highest grossing film. While its overwhelming presence certainly soured many, many people, I think what gets lost in talking about the film is it is pretty good. Frozen put just enough of a twist on classical fairy tale storytelling to show it still had a place in the modern cinematic landscape, and as a musical, the songs actually drive the story and look into the characters in a fulfilling way. Sure, “Let It Go” was catchy, but more importantly, but the reason the song works is due to its dramatic and thematic power. It was a song perfectly devised for that film, and its overplayed nature does not take that away.

Of course, the success forced Disney Animation to make a sequel, which is actually something they rarely do. Prior to Frozen II, the flagship Walt Disney Animation Studios company had only made two sequels in their history, 1990’s The Rescuers Down Under and last year’s Ralph Breaks the Internet. Other animation branches within Disney have cranked out direct-to-video (which will now be direct-to-Disney+) junk constantly, but the premiere brand avoids it mostly. But Frozen told a complete story, one that had a particularly satisfying ending. Where do they go? Having now seen Frozen II, that was a question they deeply struggled with, because the answer was not entirely clear.

Frozen II opens with Anna and Else as children, being told a story by their father (Alfred Molina) about an enchanted forest that has blocked itself off from the world after peace dealings between the people of Arendelle and the Northuldra, a tribe of people living in the forest who connect with magic, turns violent. Now with Elsa (Idina Menzel) queen of Arendelle, she begins to hear a voice call out to her from a distance, a voice no one else hears. One day, Arendelle is rocked by elemental disturbances like the ground coming apart and the water vanishing, forcing everyone out of the kingdom. Anna (Kristen Bell), being the loving, loyal sister she is, refuses to let Else go out and investigate what the cause is alone. So, they have to go to the enchanted forest, learn about the past, and save the day, obviously with Anna’s boyfriend Kristoff (Jonathan Groff), his trusty reindeer Sven, and sentient snowman Olaf (Josh Gad) in tow.

Frozen‘s thematic through line, while a bit simplistic, was incredibly effective. Embrace who you truly are and be with the people who love you for it. Frozen II, on the other hand, wants to be about so many things: not letting fear guide you, learning why you are the way you are, growing up, not letting the past repeat itself, when to lean on people and when to do things for yourself, and many other things. I admire they wanted to tackle so many different ideas. A lot of family films out there barely try to cover one. Unfortunately, the story and themes become so sprawling that each one becomes flattened, and none feel particularly resonant. Directors Jennifer Lee and Chris Buck put so much work into building mythos and backstory, which they hope enhance the drama but, in reality, distract from it.

Because the dramatic storytelling structure is lacking, the musical numbers take a hit as well. A couple of songs work, most notably Elsa’s first solo “Into the Unknown,” and these are the ones with clear places to take the characters performing them. Some just sit there. The comedic numbers, “Lost in the Woods” for Kristoff and “When I Am Older” for Olaf, are actually staged quite well visually, but the story need for them never feels earned or clear, causing not just the beat to land but the jokes not land either. Sometimes there are songs that feel appropriate, but surprisingly, Kristen Anderson-Lopez and Robert Lopez‘s tendency to write in lyrical circles drains them a bit of their impact.

What I cannot fault this film on is how it looks. The advancements in computer animation really create indelible, beautiful images. In particular, the ability to beautifully light scenes set in a misty forest astounded me. They know how to best find the colors to make every scene pop. And even though I do not care for much of the mythos of the film, how they visually depict memories or magical creatures is quite stunning. The other thing the film, for the most part, nails is the humor. Olaf, I know, has morphed into a figure of hatred for a lot of people out there (I am not one of them), and I smirked, chuckled, or full-out laughed at nearly every line Gad had. He does have a specific comedic sensibility, and I am glad I can tuned into it. I wish more people could.

Unfortunately, some good jokes can’t totally lift up Frozen II. Lee, Buck, and everyone at Walt Disney Animation Studios had a nearly impossible task at hand when crafting this story. What happens after Frozen maybe would never be satisfying, but I do not think the creative team ever really settled on an answer. Animation production proves unique challenges, since the story is constantly evolving with ideas from so many people. This feels like they were still in the process of figuring out what the movie was supposed to be rather than deciding and fully developing the idea. I continue to go back to Frozen for its lovely characters, emotional story, beautiful score, and striking visuals. I wish I could say the same about part two.