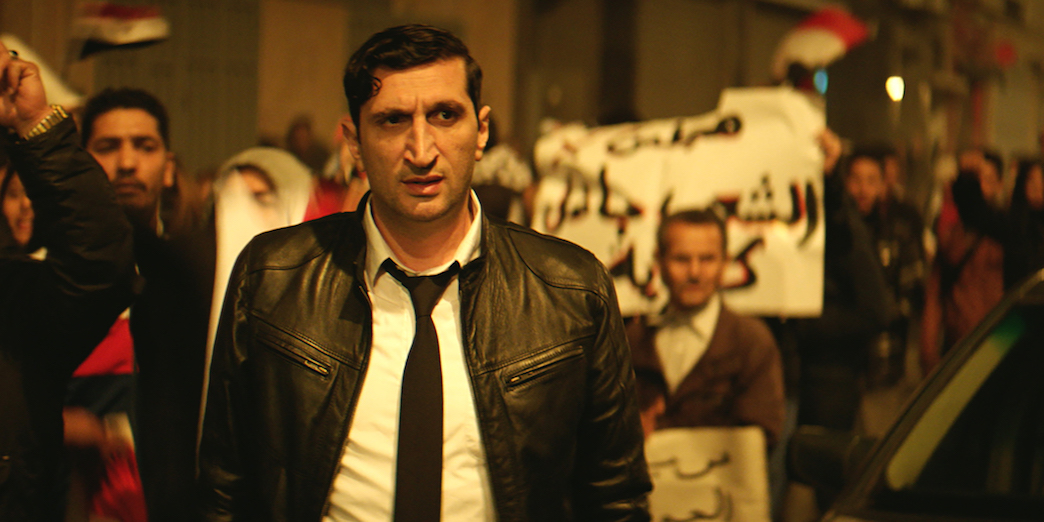 It feels rather appropriate that I watched a film about systemic corruption on the day of Donald Trump’s inauguration. Actually, this film was playing at the exact same time. Enabling the powerful with even more power at the expense of those on the bottom. Now, the corruption in The Nile Hilton Incident is not American but Egyptian, yet the concept of two people of power shaking hands while transferring money is universal. Corruption has always been around and will continue to push down those with no power, but figuring out ways to circumvent that is how a society can thrive. Such a shame, then, that a film with such an urgent message never comes to life in a way that reflects the issue its tackling, instead giving us a well-produced tepid thriller with a mystery that isn’t one.

Noredin (Fares Fares) spends his days wallowing in an empty apartment with a broken television and stealing money off the people he arrests. When there is a murder at the titular Nile Hilton of a singer, he is put in charge of the investigation. However, the case is immediately closed once word gets to the elite members of Egypt’s government, including the girl’s lover Hatem Shafiq (Ahmed Selim), an important member of parliament whose face is plastered on billboards everywhere advertising the rebuilding of Cairo. The only witness is a Sudanese immigrant chambermaid named Salwa (Mari Malek). The dismissal of the case only causes Noredin to dig further.

The way The Nile Hilton Incident is structured leads you to think is a mystery. It’s a detective following leads, getting clues, uncovering conspiracies, etc. However, we see who the killer is when it happens, so it does not make much sense for it to be played as a mystery. I understand the appeal of showing us a simple solution and complicating what we thought as the film goes on, but every answer given to us only serves our initial hypothesis more. The tension just drains out with each passing scene once it becomes clear very, very early on that these various agencies are working in tandem.

This draining of passion for what is happening also hinders the film’s setting, as the 2011 Egyptian Revolution is just gearing up. You should be as furious as the protesters storming the streets in wanting all of these corrupt officials to be held accountable for their actions, but it’s difficult to muster up the tiniest bit of fight inside you. A lot of this falls to the character of Noredin. He takes so long before taking a full stand against the establishment and spends that time instead rather ambivalent to it all. There’s an interesting arc in there somewhere, but the shift is too late to care and too sharp to be believed. I can’t rest that on Fares Fares, though. That is more of a scripting issue than a performance one.

Easily the most interesting character is Salwa, a woman at the very bottom rung of society. A person the government would have no trouble disposing of just to sweep something under the rug. She also knows she can’t just go to the police or any authority figure with her information and simply has to sit and live with it. Mari Malek, a Sudanese refugee turned model turned actor, lights up the screen and always forces you to empathize with her situation and never pity it. It would be easy for someone to portray this character as totally helpless and in desperate need of rescue. Salwa would be willing to thrive on her own given the opportunity. I wish she was given enough screen time to be a co-lead with Noredin, thus making the impact of their eventual meeting even greater, but the film heavily favors his investigation to her running.

The Nile Hilton Incident is handsomely put together by writer-director Tarik Saleh. Everything about how it looks makes you think this is going to hit you the way the best political dramas do, but there is an immediacy, a fire, missing here that could send it to that level. As it stands, this is merely a serviceable endeavor. The movie is like a robot: all the right parts with no heart.