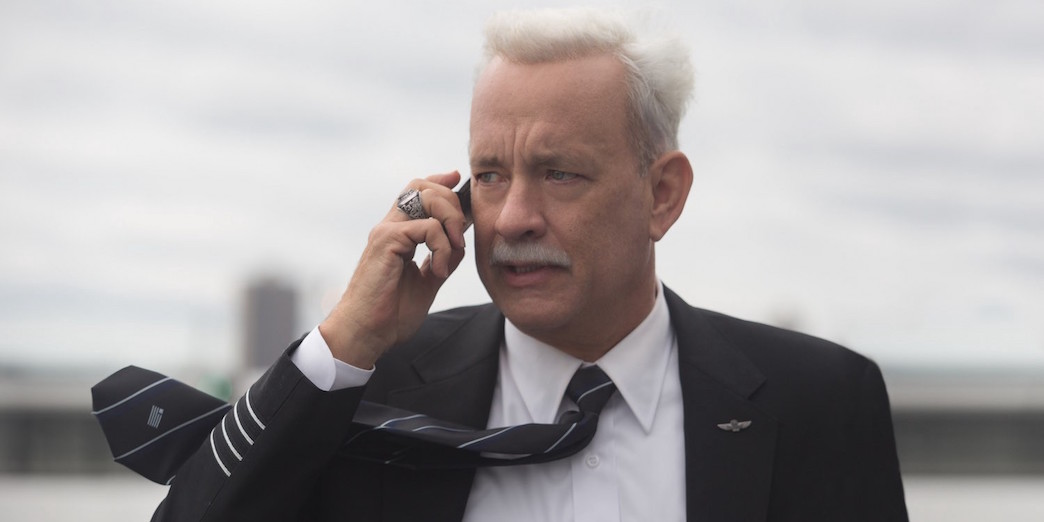 Heroes are an interesting thing. It’s comforting to have heroes, people you aspire to be. It’s nice to know there are people out there doing good things for good reasons. Hero worship, on the other hand, can be an issue. The deification of heroes, be it real or fictional, can cause a mental rift in one’s mind that says, “No, this group of people is pure good and better than the rest of us.” It removes the aspirational qualities of a hero and, instead, makes him or her a god. This is why there was so much uproar earlier this year when Captain America, in the first issue of a comic, revealed himself as a Hydra agent. He must always be pure and constantly thank him for it. We can’t have complicated feelings about heroes. Sully, unfortunately, falls into hero worship, making everyone who does not look at Captain Chesley Sullenberger as a monument of human perfection look like a monster.

We all remember January of 2009. Besides the fact it brought us the modern classic Hotel for Dogs, it was when Captain Sully made an emergency water landing on the Hudson River after both engines were knocked out by birds, successfully saving the lives of all 155 people on board the plane. It was a mighty feat that dominated the news. The only plane news to get more coverage than that was when the Malaysian airplane went missing. CNN is probably still talking about that. Sully not only chronicles that event but also the ensuing investigation by the NTSB on whether or not he could have made a safer landing someplace else.

Let me start off with the good of the movie. Each time we see the flight, it is extremely tense. Clint Eastwood shows us the landing numerous times from a multitude of points of view, be it individual passengers, air traffic controllers, flight attendants, Coast Guardsmen, and, of course, in the cockpit with Sully (Tom Hanks) and First Officer Jeff Skiles (Aaron Eckhart), both sporting immaculate mustaches. We obviously know how it plays out, but the fear, anxiety, and perseverance on display is gripping. Also, it almost goes without saying but Hanks’ everyman quality meshes well with Sully. His knack for playing a normal guy never ceases to be amazing.

The problem is this intense, terrific drama is couched in the dumb NTSB investigation. From the way Mike O’Malley and the rest of the NTSB board (aside from Anna Gunn) treat Sully, you would have thought Sully had murdered all of their spouses and could not wait to find Sully guilty in a whirlwind of revenge. Why are they such venomous, hateful monsters? They don’t look at Sully as the Great One who should be on the side of Mount Rushmore. They can’t appreciate the can-do American guts it took to achieve this miracle (even though if anyone can appreciate guts, it’s Mike O’Malley). In reality, these were just people doing their jobs, who probably marveled at this feat as much as the rest of us. This was a routine investigation dramatized into something fairly troublesome. But mainly the issue there is it’s boring.

A recent film this cribs a lot from in structure is The Social Network. The difference is in that film allows you to have a lot of mixed feelings about Mark Zuckerberg. There is a grey area to be found in how he treats people and how he created Facebook. Had Zuckerberg just been a great person victimized for being so great, all of the drama would sucked up.

There is nothing wrong with looking up to someone. In most films, your protagonist is a good person striving to achieve a good goal for a good reason. Another recent Hanks-starring film accomplishes that wonderfully: Bridge of Spies. However, if you never give a legitimate voice to the person going, “But is that really the best thing to do?” your conflict will not have any meat to it. This is why the plane sequences have adequate stakes and the investigation does not. “We don’t think you’re as much of a hero as everyone else does,” is a lame, limp conflict, making for bland drama. If you are going to see this, go to the biggest, loudest theater you possibly can to fully experience US Airways Flight 1549. You’ll have to sit through some mediocre stuff to get to those sequences, but they almost justify the price of admission.